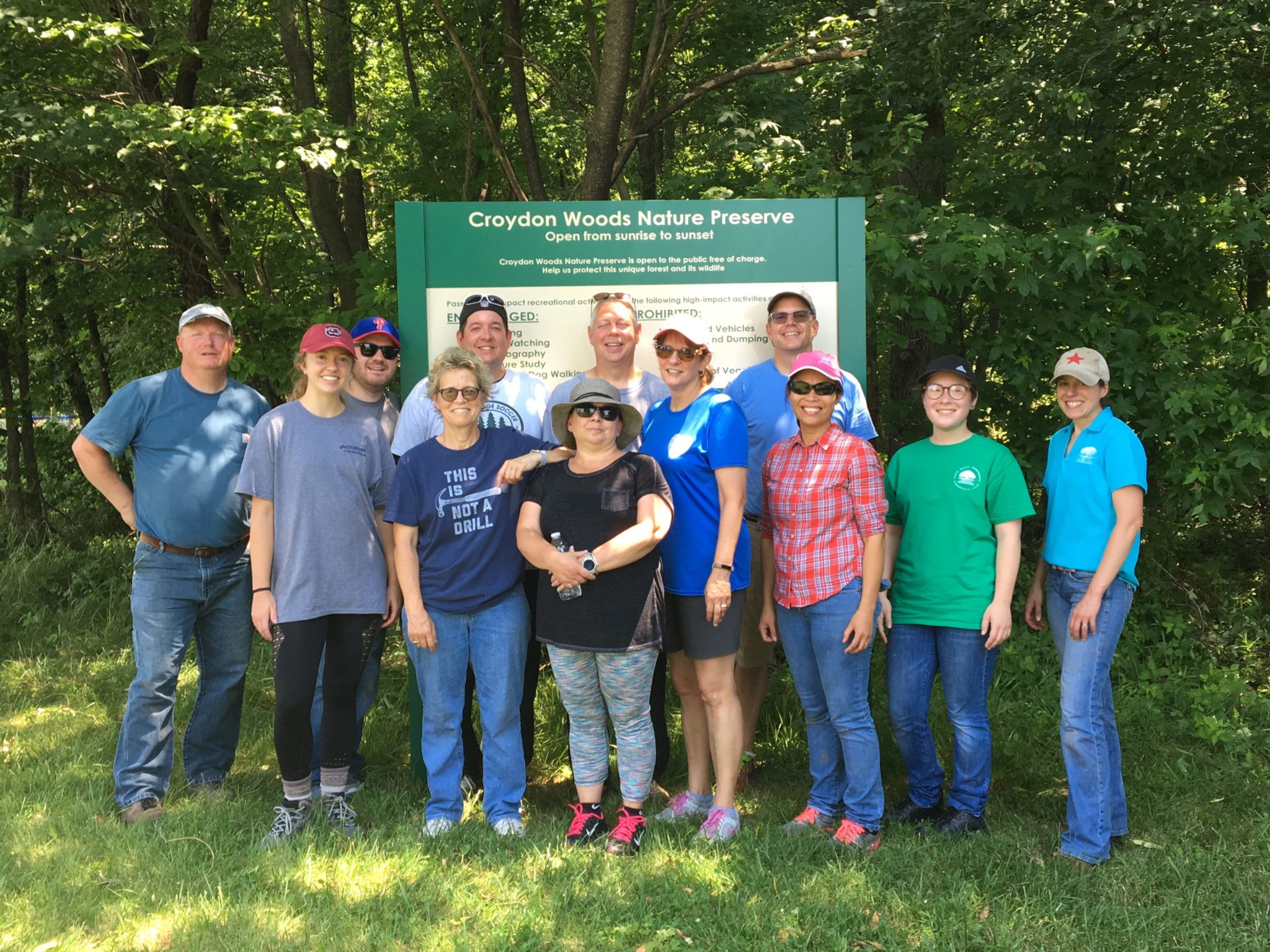 We recently welcomed nine volunteers from Fulton Bank to our Croydon Woods Nature Preserve to work alongside staff and participate in our Fridays in the Forest workday, taking on two major projects that benefit not only the woods, but the local students as well.

They first put together two “Life Under Logs” education stations, which will be used in the coming school year by students and teachers at Keystone Elementary School. Scattering the logs near the trailhead for easy access, the stations will enable the students to observe what life looks like to the creatures that dwell under them. “Turning over a log is like looking in on a whole new little world,” says our Community Engagement Programs Manager, Shannon Fredebaugh. “There is a microhabitat existing under there, like a little city with its own soil and temperature conditions and structures where animals live.” Beginning this fall, students will now have the opportunity to use magnifying glasses and bug boxes to see with their own eyes the microhabitats and their resident slugs, worms, and other decay-eating detritivores.

The second major project was the removal of the wineberry plant from what is to be a future pollinator meadow. Wineberries, originally imported from Asia, are an invasive species that can choke out native plants through rapid growth or disease. Our volunteers ultimately removed what added up to 1/10th of an acre of the wineberry plant! Pollinator meadows not only help butterflies and bees that face the risk of rapid decline, but also benefit animals of all kinds and aid in erosion control. The creation of such meadows are vital to the wellbeing of the land’s natural ecosystems. The plant removal didn’t stop there, however, as the volunteers then went on to eliminate half an acre of Japanese honeysuckle from the area around the trailhead!

To top it all off, the volunteers picked up four bags of miscellaneous trash–two from the trails and two from the baseball field–mostly in the form of a blue pool liner that had been dumped and began disintegrating. Tasks such as waste pick-up are time intensive, especially on a day already packed with activity, and we thank our volunteers for taking the time to thoroughly remove the unwanted trash from the premises.

It was a full day of labor that ultimately created space for the growth of young minds and life alike. We thank Fulton Bank for their tremendous efforts in making that possible!