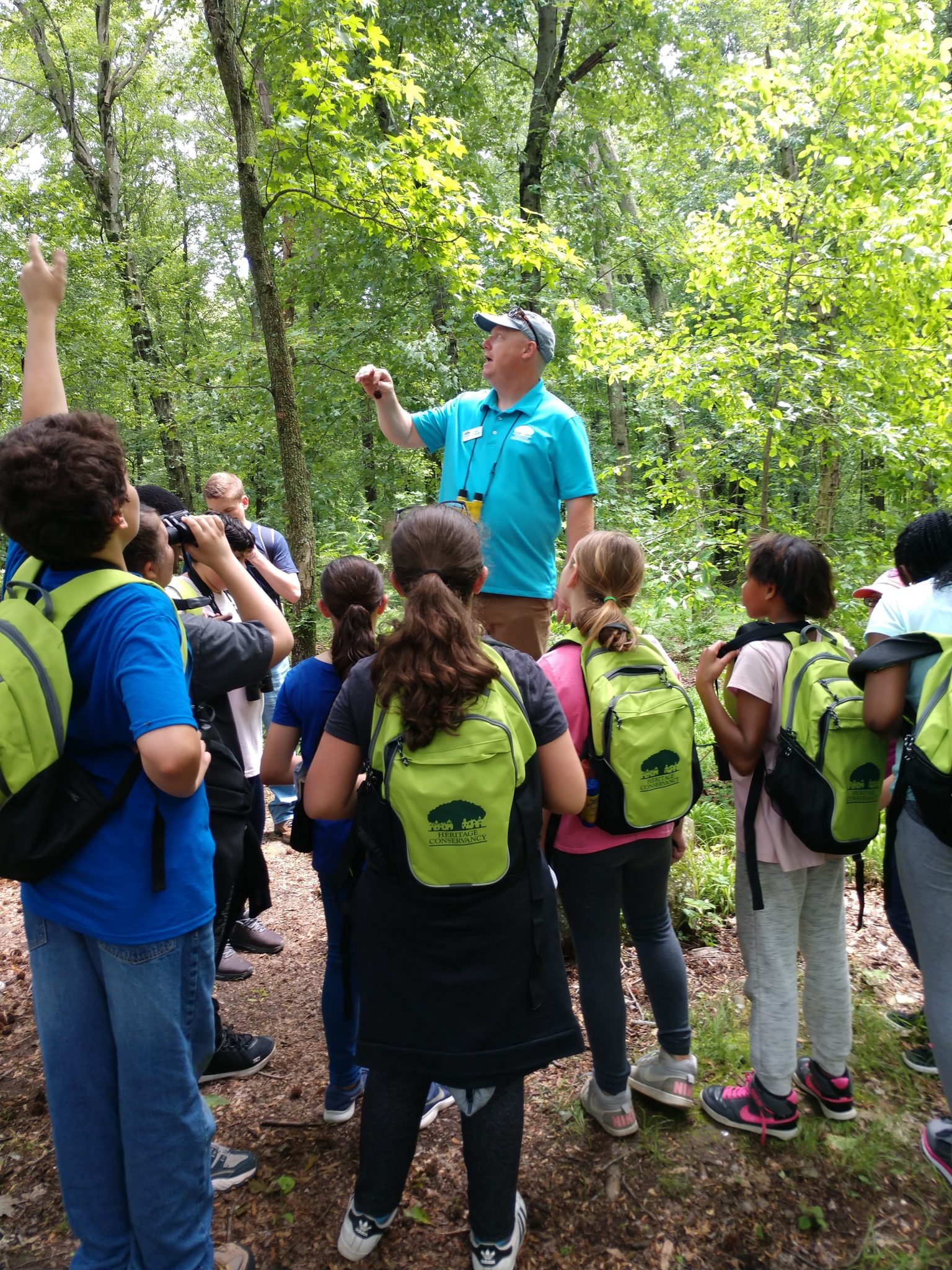 At the end of May, despite some crazy weather, Heritage Conservancy hosted end-of-the-year field trips with Keystone Elementary School! The entire fifth grade (about 200 students) came out to do programs with us at our Croydon Woods Nature Preserve and Bristol Marsh Nature Preserve.

At Croydon Woods, kids cycled through two stations: first up was the Forest Exploration station. There, the students learned about human impacts on the forest–ATV use, the introduction of non-native plants that outcompete all other foliage, trash dumping and litter, and more. The kids also learned what everyone can do to help fix those problems. Next, they were taught the different adaptations of plants and animals living in the forest. Students loved using the Nature Explorer Packs we had provided them, particularly the binoculars and magnifying glasses; many expressed interest in getting their own to use at home! After a bit of exploration, the kids were thrilled to find birds, frogs, tadpoles, deer, and even a snake.

The next station involved learning about food webs and playing predator/prey tag. Students learned how energy from the sun is captured by plants and moves up the food chain through animals. If one part of the web is lost, it can throw off the entire ecosystem. Afterward, they played a game of tag in which those who were “it” represented red-tailed hawks who had to catch the “white-footed mice” in the group. In different rounds of the game, there were snakes that could be “eaten” by hawks and had to tag mice. At other times, they could find shelter in a safe, no-tag zone to avoid predation–and still other times, the mice had to forage for food (bean bags).

At Bristol Marsh, students had four stations to rotate through, and all of them were led by Silver Lake Nature Center staff members. There was an EnviroScape demonstration, learning the animals of the marsh, discovering the adaptations that organisms have to survive in the marsh environment, and a study of human impacts on the environment. The final station required a bit of imagination as students played the roles of local business owners, biologists, and local fifth graders who needed to convince the “mayor” that the hypothetical proposal to build an amusement park on the banks of the marsh was or was not a good idea. Afterward, the class was led in a guided discussion on why it is important for Heritage Conservancy to protect Bristol Marsh and places like it.

Many thanks to all of the staff members, interns, and volunteers who helped make these field trips run smoothly! The kids learned a lot about important environmental issues from the experience, and much fun was had by all.