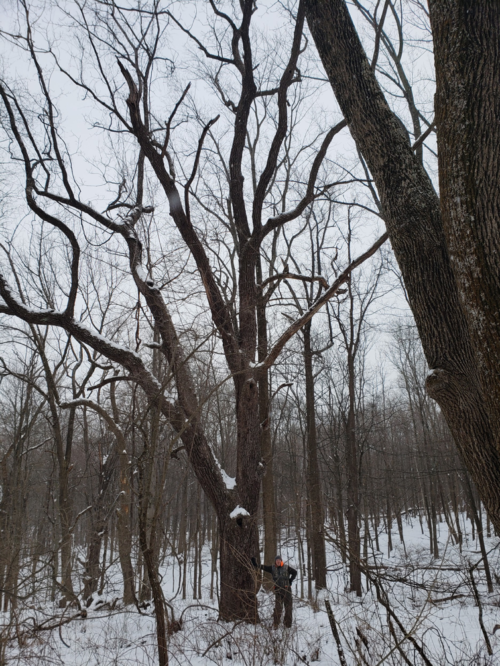 What’s the first thing that would come to mind if we were to tell you that we have “wolf trees” on some of our preserved properties? Would you assume that this meant the tree resembled a wolf in one way or another? Or that perhaps it’s often used as a source of shelter for roaming wolves?

In reality, a wolf tree is simply a tree that is much older–sometimes 100-200 years older–than the surrounding trees in the area. It has low-lying branches that spread wide in all directions. The terminology is thought to have originated from foresters in the late 1900s who believed that these old, massive trees were devouring too much space and sunlight; as a result, they were often eliminated from the landscape, similar to the wolves that were being hunted down for consuming too many forest resources. Trees with higher market value were planted in their place.

As the North American landscape changed and many forests were cut for pasture or timber harvests, some lucky wolf trees were able to remain, either for aesthetic purposes or to help mark property boundaries. Wolf trees can be seen on several of our larger preserved properties, particularly those with agricultural backgrounds! The one found on our Fuller/Pursell Nature Preserve aligns exactly with the property’s history. It is located at the edge of the red cedar forest and has some aged wire fencing running through its trunk, suggesting that it was at one time a boundary marker. Hart’s Woods Preserve and the Fisher Preserve are a couple of other properties that have a wolf tree present. Jim Drennan, our Senior Conservation Steward, explains the history of these trees well:

“Wolf trees are testaments to a property’s former life in agriculture. Often, farmers would leave a few nut-bearing trees to provide shade and free food to their livestock. Pasture would surround the tree, so it would grow wide, capturing as much sun as possible. There was no need to grow straight and tall because there were no other trees around to compete for space and sunlight. Later, when the farmer abandoned the field, trees would move in around the tree. Because there was now great competition for sunlight, they quickly grew tall and straight, eventually surpassing the height of the pasture-grown tree. With the increased shade begins the decline of the wolf tree.”

So, what is the ecological significance of these old giants? Why is it so important to leave them standing rather than cutting them down to make room for more “profitable” trees?

As a wolf tree ages over the years, it develops many significant characteristics: small hollows, layered and shedding bark, thick, spreading branches… All of these features provide a dynamic habitat for local wildlife. A single wolf tree can support a variety of species within an ecosystem: insects, mammals, amphibians, birds, fungi, microflora, and more. These massive trees are valuable to all wildlife.

When we preserve properties, we preserve history–whether it’s an old barn, a historic house, or a large, gnarled tree that has been standing for hundreds of years.