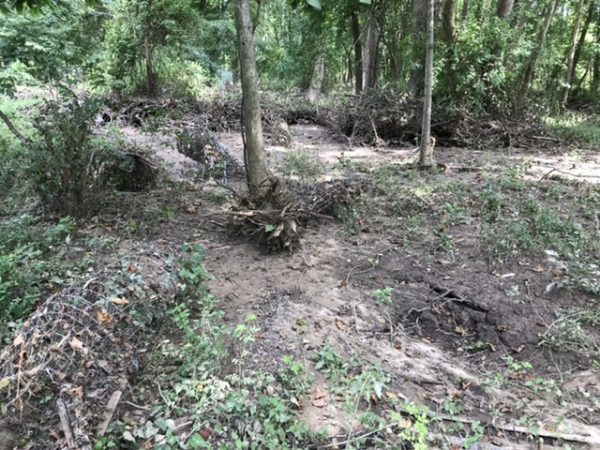 As people across the region are continuing to deal with the impacts of Hurricane Ida, the story of how two of our preserved properties were affected by the storm illustrates the importance of protecting wetlands and green spaces as a safeguard against flooding.

Riparian plantings of native trees and shrubs were conducted at both our Quakertown Swamp and Bellwood Preserves this past spring. These plantings have many benefits including keeping pollutants, fertilizers, and pesticides from entering our waterways, reducing erosion along the stream banks, keeping a stable water temperature, and providing habitat for wildlife. The projects were very similar at both sites. During the recent flooding, however, the area upstream from the planting and from each Preserve determined their fate.

Quakertown Swamp did exactly what swamps are supposed to do: it absorbed storm water run-off like a sponge! The remnants of the storm had no impact on the riparian buffer plantings. The news is not as positive at our Bellwood Preserve. Here, every tree, shrub, and cage was impacted. Fifty percent of the existing tree shelters were torn from the ground and found either wrapped around mature trees or wedged in debris piles. The other fifty percent were bent ninety degrees, along with the trees themselves. The silver lining is that very few trees were washed away, and it appears that most can be salvaged.

Why did the two preserves have such different outcomes?

Quakertown Swamp has a reasonably intact forest surrounding it. This helps to slow and absorb the water. In areas like this, streams take longer to reach flood stage and slowly subside after a storm ends.

Most of Bellwood Preserve is surrounded by pavement and other impervious surfaces resulting from development. In developed areas, rain that would normally soak into the ground or be absorbed by plants instead falls onto an impervious surface like a parking lot. It rapidly runs off into culverts where it then gets directed into the closest stream. This puts a large amount of water that would otherwise be slowed down and soaked up by the forested landscape directly into streams, resulting in flooding.

Wetlands and forest lands are vital for the resilience of our society in the face of a changing climate!