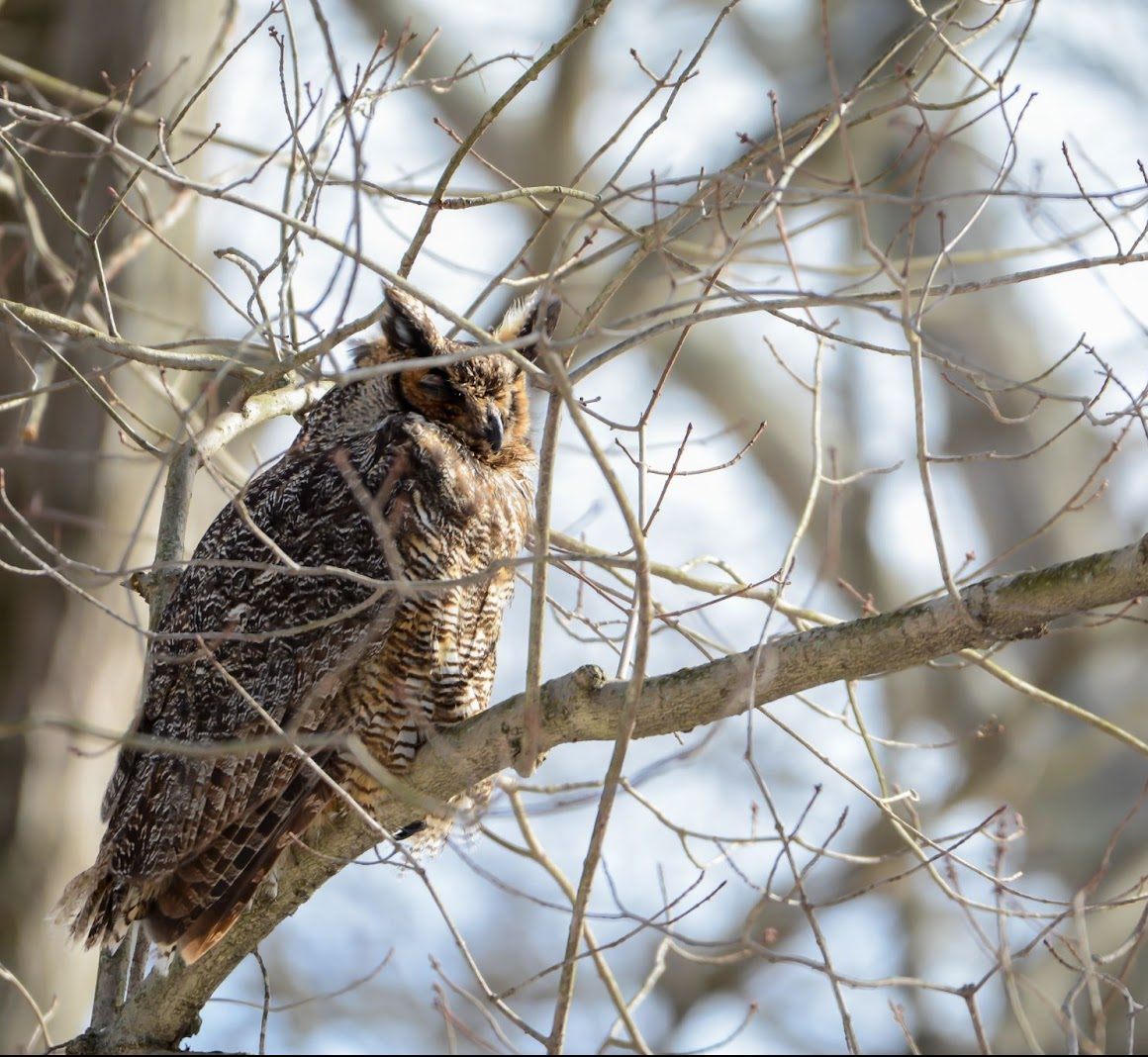 A sleepy Great Horned Owl, normally hidden, stands out quite easily on a leafless branch.

Winter has arrived, and for many, this means that time spent outside will more or less cease to exist. Frigid conditions don’t compare well to the warmth and comfort of the indoors. Yet, I wouldn’t be so quick to dismiss the value of spending time outdoors during the winter months. In this article, I’d like to highlight a handful of activities I’ve found to be worth enduring the cold for.

It’s no secret: we lose most of our greenery during the winter months. And while that may leave the forest aesthetically less pleasing (to some), it helps to reveal some of its most secretive inhabitants. Owls are elusive animals, perhaps more so than other types of birds. This is especially true during the summer when leaves make finding or even getting to these birds seemingly impossible.

Furthermore, many owl species frequent evergreen trees throughout the winter. With vegetation dying back, an otherwise concealed Pine, Spruce, or Cedar tucked back in the forest may reveal itself. Examine the trunk of those trees from a distance, and there’s a chance you’ll find an owl peacefully perched there. I say from a distance because it is best to observe owls without overtly disturbing them. Walking right up to a tree where an owl is living will scare it away or, at the very least, stress it out.

I mention all of this with a significant caveat: no matter the time of year, owls can be incredibly elusive. They’ve evolved to remain hidden more often than not. But there’s at least a shot at spotting one or two during the day when our trees are taking their break.

It isn’t always necessary to find an actual bird in order to verify its existence, whether current or former, in a forest. Woodpeckers leave their mark on trees in rather obvious ways. As you’re probably familiar, this group of birds hammers into the trunks and branches of trees to forage for insects and occasionally sap. It just so happens that at least two species do so in recognizable ways that stand out considerably during the winter.

The largest woodpecker species found in Pennsylvania creates, unsurprisingly, the most apparent damage. Large, rectangular holes located on the trunks of trees are made by none other than the Pileated Woodpecker (Dryocopus pileatus). In addition to creating large holes, it isn’t uncommon for this species to peck entire plates of bark clean off of the tree. While it can be off-putting to encounter, cavities created by Pileated Woodpeckers provide a habitat for various organisms, including mammals, fungi, and some of the aforementioned owl species.

Our only completely migratory woodpecker species produces a more intricate and less destructive woodpecker sign. The Yellow-bellied Sapsucker (Sphyrapicus varius) drills regular rows of holes into the trunks of trees to feed on its sap. They’re the only species with such neat and tidy handiwork, and while the holes are small enough to be overlooked in the summer, they often stand out quite a bit during the winter. Birches and maples seem to be their favorite trees to drill into, so keep an eye out for any that may be growing on your property!

Neither the Pileated Woodpecker nor the Yellow-bellied Sapsucker are quite as common as some of the other woodpecker species in Pennsylvania. Wintertime offers an excellent opportunity to get out and see if woodlands near you support these species. Conveniently, this doesn’t require the birds to be present or even require a pair of binoculars.

There’s no shortage of bird-related incentives to spend time outside during the winter. But other warm-blooded animals remain active, and their presence, much like woodpeckers, can be confirmed in a very fun and passive way. All that is required is a little snow and some furry feet running across it.

Deer and squirrels aside, mammals may be the most cryptic and difficult animal group to observe in the wild. They are masters at staying out of sight, which is aided by their nocturnal tendencies. Pennsylvania is home to all sorts of small rodents, shrews, and a handful of carnivorans as well. But most are either rarely seen or completely unheard of by the public. While the winter season doesn’t aid much in seeing these secretive creatures directly, with enough snow, evidence of their presence is revealed via their footprints. As you might expect, each species has its own unique track, which is identifiable in fresh snow. Some mammals, like mice, leave marks in the snow where their tail drags. Cottontails and Snowshoe Hare have unique tracks that can be distinguished by the size of each footprint. There are plenty of books out there that can aid in identifying tracks, my favorite of which I’ll link down below. Taking it one step further, if you have a trail camera, you can set one up to catch the wandering culprits in action. Just be sure to conceal your camera to the best of your ability, as they’re often stolen – especially on public land.

What a fresh sheet of snow reveals is that not only are mammals all around us, there are often many different kinds. So before you build a snowman or wage war with snowballs, consider taking a glance at the ground first. It may provide you with a newfound appreciation for white winter days and the elusive local mammals.

There are plenty of other activities worth pursuing during the winter months. It certainly requires a little willpower to endure the cold and such, but that’s the case for most worthwhile outdoor experiences. I hope this article has encouraged you to venture outside this winter. Always wear orange in hunting areas, and most importantly, enjoy yourself.